Bacteria on a Sugarless Diet

Life on Earth is based almost entirely on photosynthesis, a process through which plants, algae, and certain species of bacteria generate sugars from carbon dioxide (CO2) absorbed from the air, using water and energy from light. Organisms that do not perform photosynthesis themselves are called heterotrophs (consumers), since they require the sugars that other organisms produce through photosynthesis as a source of energy and building materials for their cells.

In a recently published article in the journal Cell, researchers from the Weizmann Institute of Science presented the first-ever transition of a heterotrophic organism to autotrophy (food producer), genetically engineering a bacterium that does not consume sugars, with carbon dioxide (CO2) in the air as its sole carbon source. 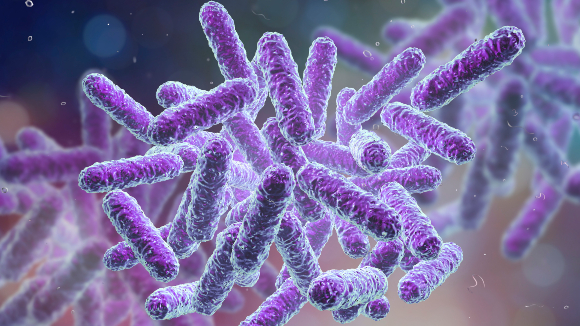 Evolution in a tube

The researchers in Prof. Ron Milo’s lab at the Department of Plant and Environmental Sciences used E. coli bacteria, a heterotrophic gut microbe that does not perform photosynthesis with a fully known genome. They started by mapping the genes essential for converting CO2 into organic carbon from two photosynthetic bacteria, and inserting them into the E. coli genome. To power this conversion, as E. coli cannot utilize the energy of light as do photosynthetic organisms, the researchers added to it a gene that enables it to produce energy from the break-down of formate, a relatively simple molecule composed of carbon, oxygen, and hydrogen (HCOO).

To wean the genetically engineered bacterial strain off sugar and compel it to fixate its own carbon, the researchers employed a technique called “evolution in a test tube:” They grew their E. coli in an environment depleted of sugar, but rich in carbon dioxide and formate, culturing the bacteria in a controlled-environment chamber, which automatically replenishes nutrients and removes waste products by monitoring the levels of the compounds. Of the cultured bacteria, only a few developed the mutations (random genetic changes) that allowed them to survive in such conditions, and they grew faster than others, taking over the culture. Every few weeks, when the mutant bacteria were observed to flourish in the culture, the researchers gradually reduced the sugar levels – until they succeeded in growing bacteria that did not require sugar at all. The entire process of “weaning” the bacteria off sugar took six months.

To ascertain that the bacteria used only carbon from the CO2 in the chamber, the researchers supplied the bacteria with carbon dioxide labeled with an isotopic carbon 13, in which the nucleus of the carbon atom contains seven neutrons instead of six, and is therefore slightly heavier. When analyzing bacteria from the culture and measuring the mass of their various components, the researchers found that the sugars, proteins, and all other bacterial biomass contained only carbon 13, i.e. – the bacteria built them from the isotopic carbon dioxide. The formate, which also contains carbon, did not serve the bacteria as a building material at all, only as a source of energy in the process of electron transfer.

“This research is a proof of concept, that it is indeed possible to transform the diet of bacteria in the lab, causing them to build their entire body mass out of carbon dioxide,” notes Milo to the Davidson Institute website. “Our work is a milestone in the global effort to cope with the great environmental challenges using efficient and green scientific applications.”

Left to right: the original bacteria, the genetically engineered bacteria, and the future enhanced bacteria. Source: Weizmann Institute of Science.

The study that led to the evolution of the unique bacterial strain spanned over a decade. Leading the study for most of this period was Dr. Shmuel Gleizer, who had conducted both his master’s and PhD research in Prof. Milo’s lab, and continues to work on the project today as a postdoctoral fellow. Additional students took part in the recent article, among them Roee Ben-Nissan and Yinon Bar-On. “We publish the things that succeed, but along the way, there were numerous failures and challenges,” says Milo. “We tried, without success, many simpler methods to create these bacteria using only genetic engineering, without evolution in a test-tube. Even this method required repeated attempts, until we succeeded to find the correct way to go about it, without contaminations of the culture with other bacteria.”

A bacteria with great environmental importance, which took more than a decade of work to develop. Milo (right) and Gleizer at the Weizmann Institute. Photograph: Eyal Kreiger

Despite the impressive success, the practical utilization of these bacteria in green processes is still distant and depends on solving several issues. First, the bacteria use formate as an energy source – not a perishable material itself, whose break-down creates carbon dioxide – so that even in the closed bacterial system, there is no absolute decrease in CO2 concentration. One of the challenges ahead lies in addressing this problem, either by using formate created from CO2 in a chemical process, or by using a renewable energy source, such as hydrogen.

Second, once the bacteria are outside their carefully controlled and restrictive environment, which forced them to survive on CO2, and sugars become available to them again, they will probably rapidly regress to relying on sugar as a source of energy and forgo carbon fixation. “These bacteria, at least for now, provide an advantage in an industrial setting, in which we can control their metabolic pathways and growth conditions,” explains Milo.

Milo sees industrial applications as the primary potential of this development. “The idea is to use bacteria such as these to create green fuels, raw materials, and other CO2-based materials,” he explains. “It can be done with carbon dioxide that we collect from the atmosphere, or with industrial excess, which would otherwise simply be expelled into the atmosphere.” Another possible application of the genetically engineered bacteria is for agricultural uses, such as creating materials used to feed animals, as well as utilizing the genetic information about CO2 fixation that the scientists have attained to improve the efficiency of other agricultural processes. The researchers also hope that these processes will help reduce the amounts of atmospheric CO2, one of the primary greenhouse gases contributing to global warming.