Neils Bohr - The Man Who Compared Quantum Particles to Football

The 137th birthday of Niels Bohr, one of the greatest physicists of the 20th century and one of the fathers of quantum mechanics

Niels Henrik David Bohr, the 1922 laureate of the Nobel Prize in Physics and one of the fathers of quantum mechanics, was born in Copenhagen, Denmark’s capital, on October 7th 1885, to a wealthy family. His father, Christian was a professor of physiology at the University of Copenhagen and his mother, Ellen Bohr (née Adler), was a descendant of a distinguished Danish Jewish banking family. In his youth, Bohr was an outstanding footballer and played as goalkeeper of the Akademisk Boldklub football team, which was among the most prominent teams in Denmark in the early 20th century. Later, when he chose to focus on his academic career, he discovered, among other things, that the football ball and the electron obey very different physical laws, and that size definitely matters.

Bohr was the second of three children. His younger brother, Harald, also played for the same football team and even made it into the national team, and later on became a prominent mathematician. Their elder sister, Jenny, became a teacher. The three grew up in a home in which curiosity and science were an inseparable part of life. Their father frequently hosted prominent figures from the Danish scientific community and his children were invited to attend the scientific discussions.

Already at a young age, Niels showed a mechanical talent and a love for fixing objects around the house. His talent in physics stood out in school, where he used to look for further information to supplement the regular curriculum taught in the classroom and had a habit of finding multiple errors and outdated details in the school textbooks. In 1903 he began his studies at the University of Copenhagen and it wasn’t long before he found himself particularly attracted to theoretical physics, and especially so, to the structure of the atom. 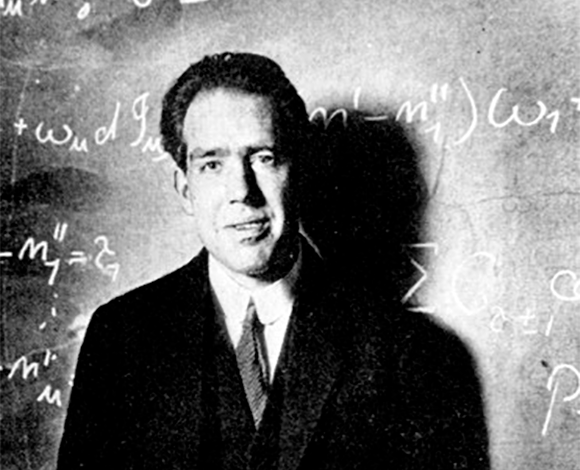 Cracks In The Understanding Of The Physical World

Luckily, Bohr was able to start his scientific journey in the years when the scientific world experienced a huge wave of exciting discoveries in the understanding of physical reality. It was only a few years earlier that Joseph John Thomson, a British physicist, discovered the electron and Bohr was very interested in his work. The young Danish scientist devoted his master's degree to the physical properties of metals, and his doctoral research focused on the behavior of electrons in metals.

After graduating with a doctoral degree, Bohr received a scholarship that enabled him to travel to England and continue his education with Thomson. After six months, Ernest Rutherford, a physicist and friend of Thomson’s, invited him to stay in his lab.

Rutherford was the one to discover that the atom consists of a nucleus with a positive electric charge, where most of the atom’s mass is concentrated, while the negatively charged electrons circle around it in disarray at a large distance. Bohr quickly realized that this model of the atom did not fully align with the physical knowledge of his day – why don’t the electrons fall into the nucleus? After all, according to the classical electromagnetic theory, the electron, as an electrically charged body in a state of acceleration, should emit radiation and thus lose energy, which would cause it to plummet in a spiral motion toward the nucleus within a very short while. 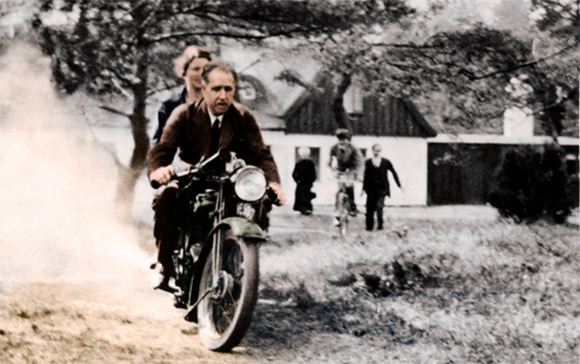 Did not understand why the electrons do not fall. Bohr and his wife, Margrethe, on a motorcycle belonging to his friend, physicist George Gamow | PHOTOGRAPHER GEORGE GAMOW, COLOURED BY SCIENCE PHOTO LIBRARY FROM A MONOCHROME COURTESY OF NIELS BOHR ARCHIVE, AMERICAN INSTITUTE OF PHYSICS

The World Of Tiny Things

At the same time, scientists began weaving together the principles of quantum mechanics, the branch of physics that deals with phenomena occuring at the atomic scale and that of particles smaller than the atom. Max Planck (the black body problem), Albert Einstein (the photoelectric effect) and other physicists, discovered that the energy states of physical systems are discrete and not continuous, and experiments showed that objects emit radiation at certain frequencies, not on a continuous range of frequencies. Based on these discoveries, Bohr came up with a new atomic model.

Bohr realized that in order for the electrons not to plummet into the nucleus, and in order to explain the discrete energy levels observed in the experiments, the electrons must move only in ‘permitted’ orbits, which have a certain energy and whose angular momentum is a integer multiple of a fundamental physical constant termed the “Reduced Planck constant”. As long as the electron is found in one of the ‘permitted’ orbits, it does not emit energy, but when transitioning from a high-energy orbit to a low-energy orbit, it will release an amount of energy equal to the difference in energy between the orbits.

Bohr published his ideas in a series of articles in 1913, and received the Nobel Prize in Physics in 1922. He continued to focus on the principles underlying quantum mechanics later in his career. Among other things, he coined the concept of the “complementarity principle”, which states that quantum objects such as an electron and a photon (a light particle) can behave both as a particle and as a wave, depending on the method of measurement. This wave-particle duality of photons is contradictory in certain aspects, but both are required to provide a complete description of the object.

Bohr also supported the probabilistic interpretation of quantum mechanics, also known as the “Copenhagen interpretation”. According to the interpretation, which is currently accepted by most physicists today, the value of certain physical quantities, such as location or momentum, can be defined only following their measurement. Until the quantity is measured, it is not defined but rather exists as a sum of states, or a superposition, in which each of the states has a certain probability to materialize during the course of  measurement.

Both scientifically and philosophically, this was a far-reaching interpretation. In the classical scientific approach, as reflected for example, in Isaac Newton’s laws of motion and gravity, which accurately describe the behavior of large objects - such as a soccer ball - it is at least theoretically possible to know everything about a given system at a certain time, and it is therefore possible to know with certainty how it will behave after a certain amount of time. But according to the probabilistic approach, there will always be some uncertainty in the system, and therefore the outcome can only be described in terms of the probability of the system behaving one way or another.

The claim that the act of measurement in itself affects the way the system will behave was also revolutionary. Bohr, who spearheaded the probabilistic interpretation, argued often about this matter with his friend Albert Einstein, who supported the deterministic interpretation and claimed, in paraphrase, that “God does not play dice”. In fact, to the end of his days, Einstein refused to accept the probabilistic character of quantum mechanics and asserted that we have yet to find the true – deterministic – physical description behind quantum mechanics. 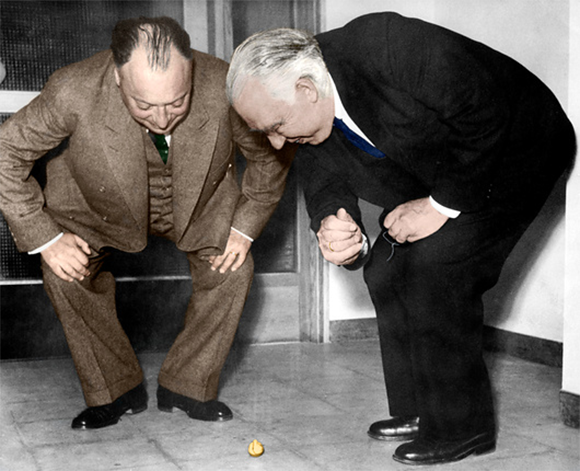 Stuck to the probabilistic interpretation. Bohr (right) and his colleague Wolfgang Pauli examining a spinning top in 1955 | PHOTOGRAPH BY ERIK GUSTAFSON WITH PERMISSION FROM THE GUSTAFSON FAMILY, COLOURED BY SCIENCE PHOTO LIBRARY, COURTESY NIELS BOHR ARCHIVE, AMERICAN INSTITUTE OF PHYSICS

Over the following years, Bohr’s research interest shifted to the processes that occur inside the atom’s nucleus, and among other things, he made a significant contribution to understanding the theory behind the process of nuclear fission. In the 30s, after the Nazis came to power in Germany, he helped several scientists, who were persecuted by the regime due to being Jewish or due to their worldview, to escape to the West. He stayed in Denmark even after it fell to the Germans, but in 1943 was eventually forced to flee to the United States.

Although he initially did not believe it would be practical to build a nuclear bomb in the foreseeable future, Bohr joined the Manhattan project – the American program designed to develop an atomic bomb. During the course of his work he tried to convince the decision makers that it was important to share nuclear knowledge with the Soviet Union, since, in his opinion, a world with weapons of mass destruction should allow free flow of information, but his opinion was not accepted.

After the war, Bohr returned to Denmark where he became one of the founders of CERN, the European Organization for Nuclear Research, which moved to Geneva in 1957, with the world’s largest particle accelerator being established as part of this enterprise. Bohr was a friend of the state of Israel and has even received an honorary doctorate from the Technion in 1959.

He passed away on November 18th, 1962, at the age of 77. His discoveries and scientific work contributed greatly to our understanding of the phenomena that occur at the atomic scale, and is justly considered one of the great scientists of the 20th century. His son, Aage Bohr, was also awarded the Nobel Prize in Physics, in 1975. Alongside his scientific work, he was active in promoting international control of nuclear weapons as well as the use of atomic energy for peaceful purposes.