The 200th birthday of Gregor Mendel, the pioneer of genetics who revealed the basic laws that govern how traits are passed down from generation to generation

Johann Mendel was born in 1822, in a small village in the Austrian Empire, to a family of limited means. His farmer parents struggled to pay for his education, but despite this, young Mendel graduated from high-school with honors. At the university he chose courses in physics, mathematics and philosophy, and despite episodes of depression, he successfully completed his higher education. Later on, contrary to his father’s expectations, who wanted his son to return to work at the family-owned farm, Mendel chose to join an Augustinian monastery in the city of Brno, where he was also given the name Gregor, upon joining the Augustinian Order.

At the time, the monastery in Brno was the cultural center of the area, and Mendel enjoyed easy access to the library and other resources at the monastery. He was later appointed to work as a physics teacher, but failed the official certification exam and was sent to the University of Vienna to continue his studies in mathematics, physics and botany.

Upon finishing his studies, Mendel returned to the monastery as a teacher. The monastery had a large garden, in which Mendel began carrying out experiments. At 45, he was elevated as abbot of the monastery and ceased his research activities, due to the deterioration of his vision and the administrative responsibilities that took up most of his time.

He died at the age of 61 and was buried in the monastery’s burial plot, at Brno’s central cemetery, not knowing that he had in fact founded a new field in biology – genetics.

For thousands of years, humans have known how to carry out selective hybridizations. That is, they understood that breeding animals or plants that carried desired traits, would increase the likelihood of these traits appearing in the next generations. During Mendel’s time, it was believed that the trait that would appear in the offspring was the result of mixing and merging between the parents’ traits. Accordingly, a black female mouse and a white male mouse would supposedly give birth to a gray offspring.

Mendel sought out to discover the laws of heredity. To this end, for eight years, he studied the sweet pea plant (Pisum sativum) in the monastery garden. He meticulously documented the resulting traits over many generations, in about 30,000 plants in total, including a record of the number of plants that expressed a particular trait in each generation. The numerical documentation allowed Mendel to reach momentous conclusions. The choice of the pea plant also contributed to the success of the research, thanks to some of its attributes: relatively short generation time (it doesn’t take long to wait for offspring), prominent and easily identifiable external characteristics, such as the color of the peas or flowers, hidden reproductive organs that enable fertilization by simple means, as well as its low cost.

Mendel focused on seven traits of the pea plant: the color of the flower (purple or white), its location along the stem (side or tip), pea color (green or yellow), pea texture (smooth or rough), pod color (green or yellow), pod shape (inflated or constricted) and the height of the plant (tall or short). He was careful to use closely related pea varieties that differed from one another by only a few traits. He carried out the research using artificial hybridization: he collected pollen from one plant and transferred it to the ovary the other. In this manner he could be certain which plants are the parents in each hybridization.

Mendel found a similar distribution of traits among the offspring, across all the traits he examined. Based on this, he reached a number of important conclusions. First, he realized that inheritance is determined by factors (which today we term genes), that are passed down from parent to offspring, unchanged. That is, no mixing occurs between parental traits. In addition, every offspring inherits one gene for each trait from each of the parents, such that every individual carries two genes for a particular trait. And finally, there are instances in which a trait is not expressed, even though the gene is present, but can reappear in the next generation. A trait that always appeared when the gene was present was termed a “dominant trait” by Mendel, and the hidden trait was termed “recessive”. In other words, the gene for the dominant trait will block the expression of the recessive trait. In the case of pea color, for example, when the gene for yellow color and the gene for green color are both present, the resulting pea will always be yellow. 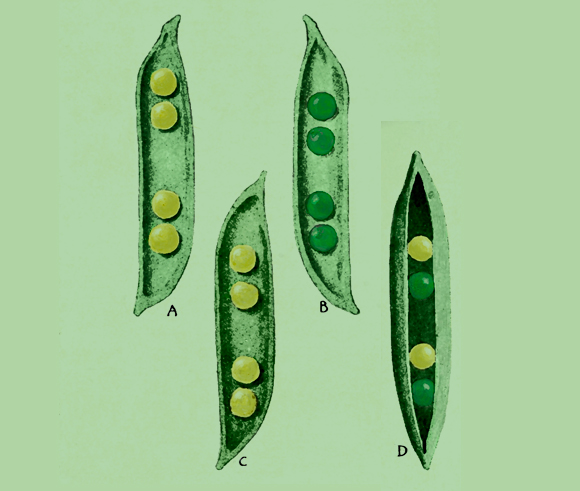 What happens when a plant with yellow peas is hybridized with a green pea plant? Illustration of Mendel’s experimental results | Science Photo Library

The Man Ahead of His Time

Further on, other researchers later discovered that these laws also apply to other plants and animals, including humans. That is, each trait appears to be controlled by pairs of genes, which can appear in different forms, as Mendel suggested. To this day, these common inheritance patterns are referred to as Mendelian inheritance patterns, and the basic laws of inheritance are called Mendel’s laws of heredity.

We know today that there are traits whose heredity patterns are more complex, such as when several pairs of genes contribute to a single trait, simultaneously. For example, human height is determined by a number of different genes. An additional complexity level exists when two traits tend to be inherited together due to the physical proximity between their genes, along the chromosome. This phenomenon, known as genetic linkage, was only discovered in 1905.

Mendel did not receive recognition during his lifetime - his work was largely ignored by the scientific community of the time, who became interested in his experiments only in the early 20th century. Mendel published his work in March 1865 under the title “Experiments on Plant Hybridization”, a title that largely obscured his important discovery and gave no reason to assume that the article in fact describes a deep understanding of the way traits are passed down from generation to generation.

Mendel also sent a copy of his article to Charles Darwin, but it appears Darwin never opened the envelope. In fact, it was only in the 1930s that biologists were able to combine the works of Mendel and Darwin, and understand how the laws of heredity enable evolutionary processes. 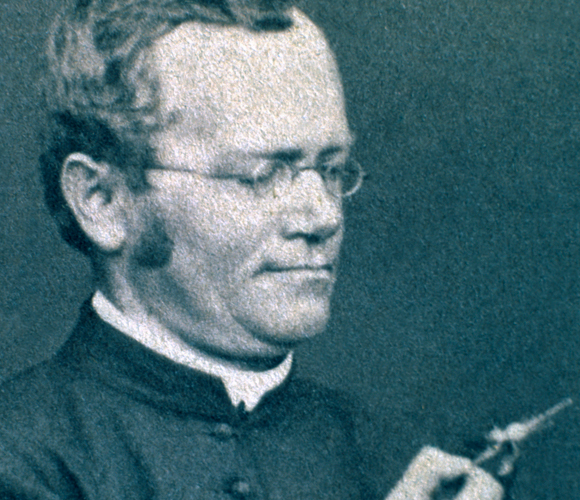 In 1936, Ronald Fisher, a British mathematician and statistician, whose research dealt with population genetics, reconstructed Mendel’s experiments and examined his results statistically. He found that the quantitative ratios between traits described by Mendel were unreasonably accurate. He then concluded that Mendel modified his findings to fit the hypothesis. Other experts agreed with Fisher’s claims. For example, statistician and geneticist Anthony W.F. Edwards stated that: “One can applaud the lucky gambler; but when he is lucky again tomorrow, and the next day, and the following day, one is entitled to become a little suspicious”.

Thus, the Mendellian paradox was conceived: statistically the findings are too good to be true, but on the other hand, based on all we know about Gregor Mendel, there is no reason to believe that he falsified his findings. One of the explanations offered for this was confirmation bias, meaning that Mendel may have focused only on the results that matched his expectations.  In this way he could focus on cases in which the expected number of offspring was obtained, whereas when the results were not as close as those expected, he continued hybridizations until a ratio that fitted the hypothesis was obtained.

Another explanation to the paradox is Mendel’s desire to simplify his findings in order to facilitate the publication of his article. In a book published in 2008, the authors examined the data in depth and concluded that the results published by Mendel were not falsified. Either way, it is clear today that his findings are correct, and that his work constituted a major breakthrough in science.

Being a monk, Mendel did not marry or have children. It is somewhat of a pity that the genes of the man known as the Father of Genetics were not passed down to future generations.