A festive experiment for Hanukkah, Passover, or anytime hard boiled eggs are on the menu

In this experiment, we learn how to make a tippe top – a spinning top that spontaneously flips over when spinning – out of a hard boiled egg and explain what’s so bizarre about it.

Watch the experiment in the following video:

At this point in the article, we usually offer a detailed, simple explanation in straightforward language to explain what happened during the experiment. But in this case, and in clear contrast to all the other experiments on our website, there is no simple explanation, because there just isn’t one. The phenomenon itself is quite simple: Take an egg “lying down” on its side and spin it with speed, it will flip over as it spins, starting to spin in a “standing” position, on one of its tips.

The explanation for this is very complicated and the result itself is weird – actually even weirder for anyone who has ever studied physics, as can be seen in this picture (which also appears in the video) of two Nobel Prize for Physics winners, Wolfgang Pauli and Niels Bohr (both of them Jewish), staring in amazement at the tippe top. 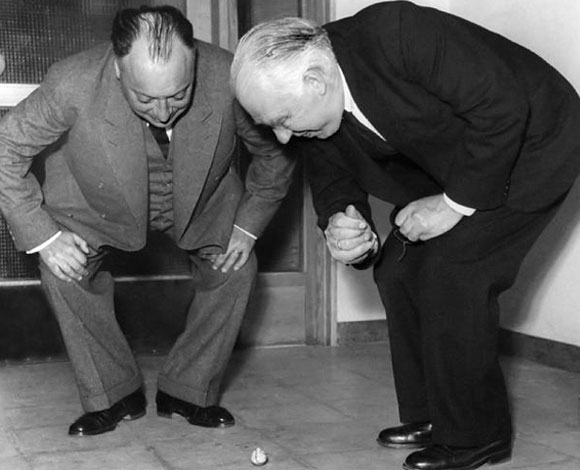 I really love this photo because it reminds me of something I heard once from Dr. Moshe Rishpon (one of the founders of the Youth Activities Unit, the precursor to the Davidson Institute of Science Education): “The difference between children and scientists is the price of their toys.”
So why are two world-renowned physicists so amazed by a tippe top? Because the inversion of  the top (supposedly) contradicts two major physics principles: The rising of the center of mass and a change in the direction of axis of rotation.

Clip: When the egg spins, its center of mass rises and the direction of its axis of rotation changes. Screenshot from the Science at Home video

Let’s explain: It’s possible to mark a “spot” on any object that supposedly shows the place where the object’s mass is centered – this spot is called the center of mass, and we have many other experiments on this subject on the website: How to balance a knife and fork in midair; the floating hammer; and the egg standing on its head.

In general, the center of mass tends to be the lowest, most stable point possible and indeed, if you try and stand an egg on its tip, you find that this is impossible because the egg will always go back to a position where its center of mass lies low – back to a linear (or lying down) state (in order to solve the problem, various tricks are needed, such as increasing the size of its base).

When you spin an egg, its center of mass simply “rises”. Generally speaking, raising the center of mass requires a lot of energy. But in reality, there isn’t such as a thing as “breaking” or contradicting the rules of physics, so clearly the energy that raises the egg must come from egg’s spinning. What isn’t clear is the mechanism, how it happens.

The second surprising thing is the change of the axis of rotation: The egg first spins on the shorter axis, and then starts spinning on its entire length. This is also a really weird thing for physicists! Spinning objects have a measurement in physics called “angular momentum” which is usually constant – it keeps going in the direction that it’s spinning. That’s why, for example, it’s hard to stop a fidget spinner spinning quickly, a regular spinning top stays stable as long as it is spinning, a motorbike stays stable on the road, and it is also why a boomerang flips. And yet – the egg spins to 90 degrees, and the tippe top spins even at 180 degrees! Very strange.

It appears that there is a force that makes the tippe top act this way. The only simple thing we can say is that it probably has to do with friction: When you try and spin a tippe top or a hard boiled egg on a slippery surface, they flip over a lot less – and sometimes, not at all. But how exactly does friction impact it – that is not at all simple. 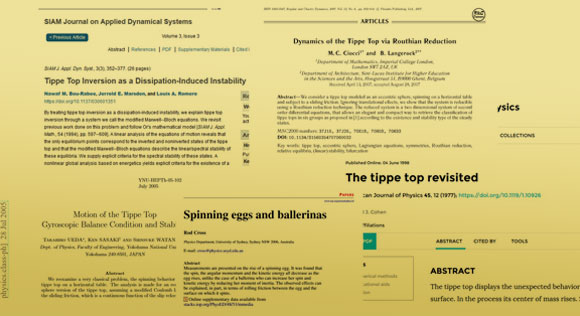 Want to find out more? Here are links to some scientific articles that explain the physics behind the tippe top (and you need first degree-level physics at least to understand it. Some of the articles also require a subscription to read the full versions).

Motion of the Tippe Top : Gyroscopic Balance Condition and Stability

Dynamics of the tippe top via Routhian reduction