Lately, reports have spread that Australian koalas were “functionally extinct.” While these marsupials are indeed at risk, with many injured in the recent fires, it is not too late to save them

Bushfires are not a rare occurrence in Australia, but those that are currently raging in the eastern part of the continent are exceptional in both intensity and timing. Summer is only beginning in the southern hemisphere, but fires have already consumed more than 18 thousand square kilometers of forested land. Six lives were lost in the fires, many thousands have been evacuated from their homes, and hundreds of houses were incinerated. Fires are also blazing in Australia’s southern and western regions, but in the meantime, they are not as catastrophic as those in the east.

The plight of the koalas, one of Australia’s most iconic species, have come to symbolize the horrific inferno. Photos and videos of injured koalas, being carried away from burning forests or receiving care, fill the news websites and social media. Alarmingly, several websites have reported that the fires have destroyed around 80 percent of the koalas’ habitat, leading the species to become functionally extinct.

The term ‘functionally extinct’ means that the wild population has dwindled to a point at which its chances of recuperating and growing in the coming generations is close to zero. The truth, in turns out – much to our relief – is different. While the koalas’ future is at risk, the situation is not as bleak as portrayed in recent reports, and some researchers even believe that the exaggeration is only harming conservation efforts.

The International Union for Conservation of Nature’s Red List of Threatened Species details the conservation status of animal species by their numbers in the wild and the threats they face. Koalas are listed in the vulnerable category, a notch above endangered.

How many koalas are there in the wild today? Assessing the size of the wild population is not simple feat, but the best estimate available today have the species at 300 thousand in 2016. This number represents a steep decrease in the population size, of 24% percent in the last three generations. And the situation has not improved: The protection granted to koalas by the law does not help them when the eucalyptus trees on which they live are being cut down to clear areas for agriculture or construction. “Very little of koala habitat is designated as protected area. Almost nothing,” says Christine Adams-Hosking from the University of Queensland in an interview with National Geographic. Koalas are also attacked by dogs and suffer from draughts, which are getting more severe over recent years, due to climate change. Furthermore, many of them have contracted chlamydia – some populations are entirely infected with the disease. 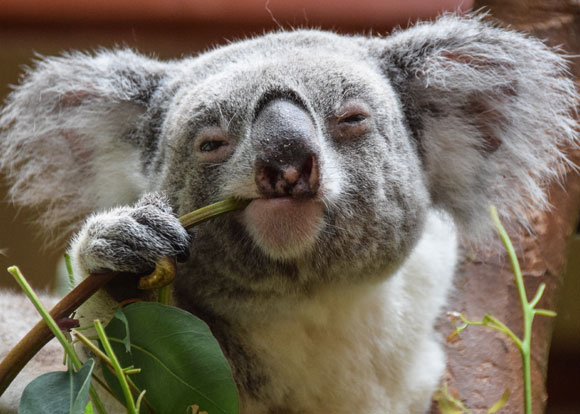 The animals are protected by law, but not the eucalyptus trees which are their sole habitat.

Helpless in the blaze

The fires pose a danger to the koalas, even more than to other bush animals. “They’re such helpless little things,” says Adams-Hosking; “A bird can fly, a kangaroo can hop very fast, but koalas are so slow. They basically just get stuck where they are.” The only thing that a koala can do during a fire is to climb higher up in the tree. It is normally a very effective strategy, as the flames do not usually reach the top of the trees. But this year’s fires are more intense, reaching heights they did not previously. This translates into greater harm to koalas: It is estimated that 350-1,000 koalas have perished in the recent bushfires.

“But this is not enough to change their overall threat status as a species,” says Diana Fisher from the University of Queensland. That is, as a species, koalas are not yet endangered, and certainly not extinct. In some regions, mostly in New South Wales, the koala population has suffered a grievous blow; however, in other areas, such as in southern Victoria, there are populations that have barely been affected.

In addition, it is not true that 80% of the koalas’ habitat have been decimated in the fires. Koalas live along Australia’s eastern coast, and most of the area’s forests were not burned. Even forests that were damaged by the fires still exist and can recuperate, “Just because an area has been affected by fire does not mean it has been ‘destroyed’ and is no longer suitable for occupation by koalas,” says Grant Williamson from the University of Tasmania.

So where are the doomsday reports, of koalas having become ‘functionally extinct’ coming from? It all started with the Australia Koala Foundation’s press release in May 2019, which mentioned the term ‘functionally extinct’ and claimed that there are no more than 80,000 koalas across the continent – at odds with the aforementioned researchers’ estimate, which put the number of koalas at around 300 thousand. The foundation’s chairperson, Deborah Tabart, was interviewed for a Forbes article after the recent fires, and her claims about the koalas’ predicted extinction made the headline. With numerous readers sharing the article and quoting it, this article is apparently the main source of the headlines in other news websites. Forbes was considerably criticized about this article, leading the magazine to change the headline and add clarifications.

Assertions such as those made by Tabart may cause damage, says the University of Maine’s Jacquelyn Gill in an interview with the New York Times. “What is particularly frustrating about the term ‘functional extinction’ is it indicates a population that is basically past the point of no return, so it means that nothing really can be done,” she says. Noah Greenwald, from the Center for Biological Diversity agrees with her: “That would almost suggest that we give up hope, and I don’t think it’s at that point yet.” If, by exaggerating about the marsupials’ predicament, the Australia Koala Foundation hopes to encourage readers to reach into their pockets and donate for their rescue, it might turn out to be a double-edged sword: Many people might hesitate before they spend money on what is presented to them as almost a lost cause.

Koalas are in danger, but is still not too late to help them – and that is important to understand. Recent decades have shown that populations of wild animals that were in danger of extinction can recuperate and thrive – when provided with the proper conditions. The question now is if the necessary resources will be allocated so that future generations will be able to see koalas in Australia’s eucalyptus forests and not only in zoos. It may not be simple, but it is certainly possible.