The cousins looked up curiously as the siren blared.

Ran: “Yeah. But it’s no big deal. Mom and Dad told me that Iron Dome keeps us safe. But we still have to be careful and get into a safe room. Here, Yael, come in!”

Yael: “Yeah. They keep talking about Iron Dome on the news. What do they mean? It might be made of iron, but it doesn’t look like a dome at all!”

Ran: “I think it’s just a name the military gave the system. But how does it work? And what are the rockets that it shoots down?”

Yael: “I know just the person to ask! My mom’s friend is a scientist from the Weizmann Institute of Science. She’ll know for sure! As soon as we leave the safe room and have cell phone reception, we can call her."

Yael: “Ayala? It’s Yael. I remembered that you are a physicist, and my cousin Ran and I have some questions for you about Iron Dome. Is that okay?”

Ayala: “Hi Ran and Yael. Sure, I’d be glad to explain everything I know. First, you should know that Iron Dome is a military system, so some of the details about it are kept secret. But I can tell you what I do know.”

Ran: “Can you explain what a rocket is in the first place? They keep talking about shooting rockets but I’m not sure what they mean.”

Ayala: “Sure. A rocket is an artillery vehicle that can be used as a weapon, like a shell fired from a cannon, or a missile. What’s special about these weapons is that they aren’t shot in a straight line, so you don’t need to see the target to hit it. Rockets are shot into the sky and they can fall far away, up to tens of kilometers.”

Yael: “That sounds like throwing a ball into a basket, right? It’s not thrown straight ahead but upwards, so that it reaches above the basket and then falls in.”

Ayala: “Exactly. Throwing a ball into a basket is like shooting a shell from a cannon. Your hand is like a cannon, propelling the ball. Once the ball or cannon shell is released, it has no engine to propel it forward so it falls.”

Ran: “That’s wrong. It doesn’t fall straight away! First it goes up and then it starts falling down.”

Ayala: “Right. It keeps moving up because when the ball left your hand, you pushed it so strongly, it was moving upwards quickly, but as soon as you let go, you stopped applying force to it, and the only force acting on it was gravity, pulling it down. We call that falling. As soon as it left your hand, the ball was in free fall. But since you threw it with speed, it doesn’t fall straight down but goes up a little bit, stops very briefly and then starts going down and approaching the basket. The shape is called a ‘parabola’”.

Rocket trajectory in free fall, with no air resistance

Yael: “That’s so interesting. I didn’t know a ball could fall upwards. Funny. But hang on - if a ball is like a cannon shell, what is a rocket like? Is there a difference?”

Ayala: “A rocket has an engine. When a rocket is launched, its engine works and propels it, just like how the cannon propels the shell. But the rocket engine keeps running after it takes off to keep propelling it. Only once the rocket fuel runs out, the engine stops working and the rocket enters a free-fall, just like a shell or a ball.”

Yael: “And like the ball, it doesn’t fall straight away, but makes a shape of a parabo-something?”

Ayala: “Exactly. The rocket makes a parabola shape. It starts where the engine turns off, high up in the air.”

Ran: “Oh! So if a ball is like a shell, a rocket is like Superman taking a basketball, flying quickly up high and letting go?”

Ayala: “Wow, I would never have thought to put it that way, but it’s true. As long as Superman flies with the ball, he is like a rocket engine. When he lets go, the ball keeps moving in the same direction yet is also in free fall. Just like what happens when a rocket engine turns off.”

Ran: “Yay! I got it right. But wait a minute. If the rocket is about to fall in a bad place, can it restart the engine and change course?”

Ayala: “No. Rocket engines work until they turn off, and can’t correct course. That’s the difference between a rocket and a missile: A rocket can change course in mid-flight, at any time. So it’s very difficult to predict the trajectory of a missile, but relatively easier to predict that of a rocket.”

Yael: “Wow, that’s interesting. So when a rocket is fired at us it flies and falls on us. So what does Iron Dome do? How does it protect us? And how do they know where to sound the alarm?”

Ayala: “Well, Iron Dome is a system made of several parts. First a radar, which recognizes the rocket as soon as it’s launched, as well as measure its speed and direction. When the rocket engine turns off and the rocket begins its free fall, the radar can compute the trajectory of the rocket until it hits ground and tell the operators where it’s likely to hit. If the radar predicts a hit in an area with houses and roads - where people could easily get hurt - it gives that information to the alarm system, which sounds in those areas, so people know they need to get into safe rooms.”

Yael: “So if the rocket just enters free fall, and the radar measures it that well, can we really know which house it will hit?”

Ayala: “No, no. Unfortunately the trajectory of a rocket is slightly more complicated than what I just explained, and there are other things that can affect it. The air affects the rocket, and wind can move it slightly off course. So we can’t say exactly where the rocket will fall, but rather in what city or area.”

Yael: “And how does Iron Dome protect us besides sounding the alarm?”

Ayala: “You must have heard of Iron Dome “batteries”, right? So next to each big city or area that needs to be defended, there is an air defence missile battery. This is a launcher with a group of missiles. When the Iron Dome radar detects a rocket that is about to hit a city, the battery fires a missile towards the rocket.”

Yael: “But you said nobody knows exactly where the rocket will fall. So how do they know where to fire the missile?”

Ayala: “You’re right, it’s very complicated. That’s why Iron Dome is a very special system. The Iron Dome missile is very smart, and has cameras and other equipment that can track the rocket in the sky, without the radar. So when the rocket’s trajectory is more or less decided, the missile is fired at it, and as it gets closer it corrects its course as needed. As it gets very close to it, it explodes.”

Yael: “Wait. Once I dropped a glass and it shattered on the floor, there were little pieces of glass everywhere and it was very dangerous. What happens when the missile and the rocket explode? Where do the broken parts go?”

Ayala: “That’s right, Yael. When a missile and a rocket explode, they break into pieces, and those pieces, called shrapnel, fall down and can be dangerous. That’s why we get into safe rooms and stay in them for a few more minutes after we’ve heard the blast. A piece of shrapnel that hits the outside of a safe room won’t hurt it. So if we combine Iron Dome with the right behavior using safe rooms, we have very good protection.

"Even if we’re outside with no safe room, if we lie down on the ground and cover our heads, there’s almost no chance of shrapnel falling on us.”

Ran: “Wow, Ayala, thanks. This was really interesting. We feel safer already!”

Ayala: “My pleasure, kids. I hope you can go back to enjoying a quiet, pleasant, and fun summer vacation!” 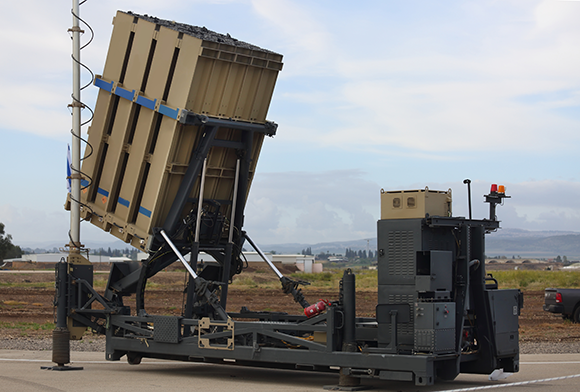