In the first months of life, babies sleep intermittently throughout the entire day. Why does this happen and when will Mommy and Daddy be able to get a full night’s sleep?

Many new parents yearn for a regular night’s sleep - just a few hours in a row - but in vain. The “blame”, of course, lies with the newborn: during the first weeks and months of their lives, babies’ sleep is very different from that of adults. How does it differ? First, babies spend much more time sleeping than adults do. Until the age of two months, babies sleep an average of 14.6 hours a day, after three months they sleep on average 13.6 hours a day, and at the age of one or even up to the age of two they still sleep more than 12 hours a day on average. However, there is much variation within the population: during the first few months of their lives, the total sleep duration of babies is between 9 and 20 hours a day. A fact that is even more relevant for the weary parents is that babies sleep in short naps, or segments of sleep, which initially last less than an hour on average. Even later on (at the age of one and older), many babies wake up at least once during the night. 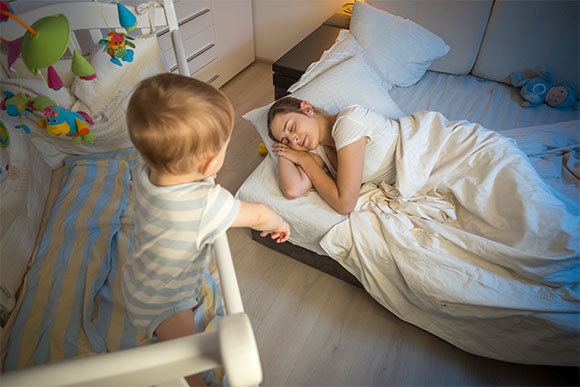 Babies sleep in short naps, and most babies aged one year and over wake up at least once a night. An alert baby and a tired mommy. | kryzhov, Shutterstock

A Small Stomach and No Biological Clock

The most obvious reason for fragmented sleep patterns in babies is the need for nutrition. Babies need to grow, and for this they also need to eat. Their stomach capacity is tiny, thus they must eat many small meals—and for this they need to wake up. Another obvious reason is discomfort, for example during teething. There is also a hypothesis that babies’ relatively light sleep is in fact a defense mechanism against apnea and sudden infant death syndrome: it’s harder to wake up from deep sleep, thus deep sleep raises the risk of the baby not waking up, if it is suffering from some kind of sleep apnea. Therefore, babies sleep deeply only for short periods of time.

Not only do babies sleep longer, and in shorter time segments than adults, they also sleep at different times of the day. The sleep-wake cycle of adult humans is controlled by the circadian clock, an internal mechanism that regulates the approximately 24-hour long body rhythms. This internal clock also regulates the cycle of hunger and satiety, hormone release, and more. The biological clock is adjusted to the external day mainly by the body’s response to light. Owing to this adaptation, we sleep mostly at night and are awake during the day. None of this applies for unborn fetuses and newborn babies. When the fetus is found inside the womb, the mother’s body provides the cyclical signals in the form of hormones and other substances that cross the placenta. After birth, the baby gradually develops both the ability to set up daily rhythms and the capacity to synchronize its biological clock using light. Until the daily rhythms are established, babies do not necessarily prefer to sleep at night rather than during the day—their sleep segments are distributed uniformly throughout the entire day. Babies gradually acquire a preference for sleeping at night, usually during the first three months of life. A particularly important role in creating this preference is played by the hormone, melatonin, which is secreted in response to darkness and promotes sleep, and the hormone, cortisol, which is released in the morning and promotes awakening. The daily cycles of release of these two hormones emerge and stabilize gradually between 8 and 12 weeks of age.

As mentioned above, even at later ages it is not uncommon for babies to wake up during the night. One interesting possibility is that waking up to nurse at night actually encourages sleep. The composition of breastmilk changes throughout the day, with the milk produced at night containing more melatonin and tryptophan, which is the precursor of melatonin. Accordingly, it turns out that night feeding, particularly on “night” milk, does indeed benefit a baby’s sleep. 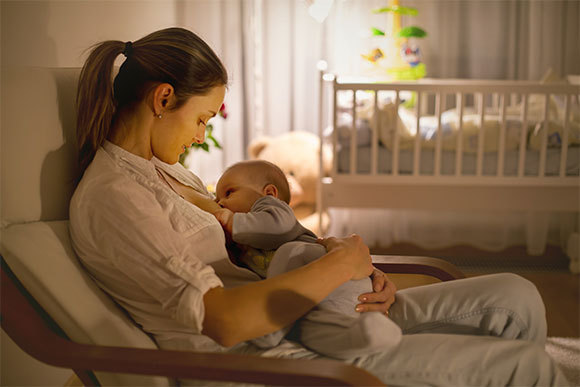 The differences between babies’ and parents’ sleep patterns may seem strange, and they are no doubt frustrating. But we must remember that humans are born before completing their development, similar to chicks and rodent offspring, thus, a significant part of the maturation of our body systems takes place after birth. This is true not only regarding physical growth, but also for brain development, development of control over the body’s organs (motor control), language acquisition, and more. It’s therefore not surprising that the system that regulates the sleep-wake cycle also develops gradually during the first few months of life.

Another interesting finding indicates a link between exposure to light during childhood and the chronotype in adulthood. The chronotype is a person’s preference for activity during the early hours of the day (“early birds”) or during later hours (“night owls”). It turns out that babies born in the summer tend more towards being night owls, while those born in the winter are more likely to become early birds. The reason for this may lie in the number of daylight hours the baby is exposed to during the day. Two findings support this hypothesis: the link between date of birth and chronotype is more pronounced at higher latitudes, i.e. closer to the poles—where the difference between the number of daylight hours in summer and winter is larger; and in rural areas—where exposure to artificial light at night is lower.

We note that babies’ irregular sleep patterns are, in general, a completely normal and healthy characteristic of their age, and that sleep patterns vary widely between babies, countries, cultures, and developmental stages. However, many parents, particularly in the Western world, expect their children to sleep through the night at the earliest age possible. This is completely understandable in light of the impact of a baby’s sleep on its parent’s sleep. Nevertheless, even if this expectation is not fully met, we can take comfort in the fact that this intermittent sleep is completely normal and also temporary.