The Ancient Math Secret of Pop-It

The endless popping game is taking the world by storm. Why do we enjoy popping bubble wrap, and how can a simple mathematical secret be used to guarantee victory in a game of Pop-it?

Addictive neighbourhood games have accompanied the childhood of most adults living today. For decades children have enjoyed spending their recess at school shooting marbles and flipping pogs, as well as clapping their hands in an attempt to flip the opponent’s Super Bowl cards, as in the early 2000’s. Numerous times we returned to class with our hands still sore from the thrill of the game that had just ended. Lately, a new hit has taken over, and this time it is an especially addictive logic game called ‘Pop It’.

While Pop-it has become common in school recesses only during the recent year, this game was originally developed already in the 70’s by an Israeli couple, game designers Theo and Ora Coster, who established a family business of games development and were credited with many inventions in the field, including the game “Guess Who”.

Apart from the enjoyment one can draw from the competitive nature of the game, the social experience surrounding it, and the logical challenge it presents, it appears that there is an additional, equally important factor, that makes the game particularly attractive and highly addictive. Anyone who has played Pop-it even once knows that popping the silicone bubbles provides an addictive sensory and mental gratification, which is especially reminiscent of the feeling one may experience when popping the air bubbles in the bubble wrap that is often utilized for the packaging of fragile items.

The object of the game, as implied by its original name “Last One Lost”, is not to be the one left to press the last bubble on the board. The board itself is made out of silicone and consists of a line of pressable bubbles. At the beginning of the game the player should make sure that all the bubbles are facing upwards. Each player in turn chooses one row, in which he or she  can press one or more bubbles, with the number of presses per turn determined only by the number of bubbles remaining in the selected row. The player left to press the last bubble - loses. After popping the last bubble you can flip the board and start a new game.

Before we reveal the mathematical secret that makes it possible to win every Pop-it game, let us try and understand why we derive so much pleasure from hearing the pop-pop sounds produced by the pressable silicone bubbles. 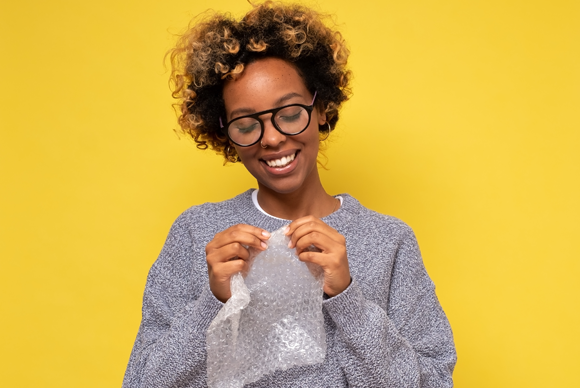 What makes it so enjoyable to pop them? A woman smiling while popping bubbles in bubble wrap | Image: Shutterstock, Koldunova Anna

The Pleasure of Popping

The desire that awakens when one opens a shipping package containing bubble wrap and the delight and satisfaction derived from popping the air bubbles and hearing the “pop pop pop” sounds, are probably universal. One piece of evidence for this is that the Facebook group named Popping Bubble Wrap has reached nearly 500,000 followers. Many of them attest that the action fills them with a sense of gratification and peace of mind. However, is there any scientific evidence that bubble wrap is effective in relieving stress?

During the early 1990s researchers from the U.S. published an article examining the positive effects of popping bubble wrap. Thirty participants were asked to fill in a questionnaire regarding their sense of fatigue, energy, stress and calmness at the beginning of the session. The control group was asked to fill in the same questionnaire following a period of inactive waiting time, while the study group was asked to spend the time popping bubble wrap. According to the questionnaire filled by the participants following the experiment it appeared that the participants in the bubble wrap popping group reported being more calm, alert and energetic than they were before the popping activity, while no difference was reported in the same parameters by the control group. However, the comparison might have been more relevant if the control group subjects had been asked to perform a different activity.

However, not all studies found a direct connection between the act of bubble popping and stress relief. A recent study, published in 2020, measured brainwave activity, using EEG electrodes attached to subjects’ heads, while participating in one out of four activities perceived as relaxing. The researchers compared the brainwave frequency in the prefrontal cortex region to patterns of electric brain activity associated with either stress or calmness. Interestingly, in contrast to the expectations, the study did not find a significant change in frequencies to be associated with the sense of calmness that accompanied the popping of bubble wrap. It is interesting to note, however, that this study also found a decrease in the calm-associated brain frequencies in subjects who were asked to hug a pillow for several minutes.

Even if no clear evidence exists as of today to support the notion that the popping of bubble wrap confers calmness and gratification, some product developers have already identified the pleasure that their customers take in products that offer a multi sensory feedback to user actions. Smartphones react to touchscreen actions by producing sounds and vibrations that intensify user experience. While many studies deal with streamlining the multi sensory synchronization and its applications in a wide variety of products, the underlying reason for the human desire to produce popping sounds using their fingers remains unknown.

Having dealt with the expected enjoyment from a mere touch of the board, we can discuss the equally great enjoyment that can be derived from winning a game of Pop-it, with the help of a few simple mathematical tools.

Be Zero in Order to Win

The key to winning a game of Pop-it is binary numbers. Although using this method can significantly slow down the game, there is no surer way to win!

In fact, this secret has been known for over a century. The Pop-it game is nearly identical to an ancient game called “Nim”, where instead of silicone bubbles players used stacks of matches or stones. The exact origin of the game is unknown, but versions of it are widespread around the world. Each stack in a game of Nim is equivalent to a row of bubbles in a game of Pop-it. In each turn the player must remove at least one item from one of the stacks. In one version of the game, which mostly resembles current-day Pop-it, the losing side is the one who removed the last item. In order to win in Nim and Pop-it, the opponents must constantly place themselves in a ‘winning position’. In order to understand how to calculate what a winning position is, it is first important to understand binary numbers. 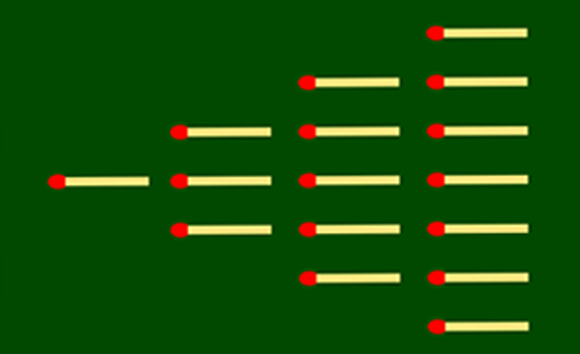 Pop-it may be a new game, but it is based on an ancient game called Nim, which is played using stacks of matches or stones. Matches arranged for a game of Nim | Image: Wikipedia, Uncopy

While the numbers that we normally use are decimal, that is, they are based on ten digits - from zero to nine, binary numbers are based on two symbols only: zero and one. In binary numbers we will count as follows: 1, 10, 11, 100, 110, 111… etc. Binary numbers are useful in electronic systems (where 0 and 1 represent the difference in voltage or current levels), in mathematics as well as in computer science. The winning strategy in Nim, which is likewise useful in Pop-it, consists of opening each turn by translating the number of objects in each stack of matches or each row of bubbles to binary numbers. The ‘Nim-Sum’ is then calculated by aligning the binary numbers vertically, as in long addition, and in each column we check whether ‘1’ appears an even or an odd number of times. If ‘1’ appears an even number of times - the sum of this column is 0, whereas if ‘1’ appears an odd number of times - the sum of this column is 1.

When nearing the end of the game, you should hold for the moment when the opponent brings the board to a state in which only one row holds more than a single unpopped bubble - a position that experts in binary numbers will avoid, since its Nim-Sum is different than zero. This is the moment of truth. At this point you should either completely remove the aforementioned row, or leave a single bubble, whichever brings the board to a state of an odd number of rows with a single unpopped bubble. From there, each opponent pops a single bubble and the road to victory is paved.

An example of a turn:

Three rows were completely popped, three more rows still have bubbles to pop. How should we proceed? | Ma’ayan Karlinski and Roni Stok

In the image we see a Pop-it board in which three of the rows are completely popped, and in its three other rows one still has five unpopped bubbles, the other row has three unpopped bubbles and the last row has only two (State A). Calculate the Nim-Sum of the board as follows:

An educated look at the common Pop-it board, which includes two rows of three bubbles, two rows of five bubbles, and two rows of six bubbles, one can draw an important conclusion: the Nim-Sum of the board prior to the first turn is zero. This means that the board “starts” at a winning position, and if both players have command of the binary strategy, the player who plays first will repeatedly convert the board to a losing position, and his loss will be inevitable. Therefore, it is better to play against opponents who do not have command of this method. Pleasant popping!