Does Candy Cause
Tooth Cavities?

Sugar and sweets are considered the root of all evil with respect to dental health, but in reality they have but a small, albeit significant role in the process that leads to dental caries

From a young age we are told that if we eat sweets we will have teeth cavities. This statement is fundamentally correct, albeit inaccurate. After all, sugar alone does not damage dental tissue. The actual harm is caused by an acid that is secreted by bacteria that inhabit the oral cavity, after these digest food remnants left on the surface of our teeth.

The oral cavity is home to many types of bacteria, some of which play important and helpful roles in maintaining a healthy mouth. Alongside them live harmful bacteria that can damage the tooth enamel - the shiny outer layer that protects the teeth. Oral bacteria, in general, are usually harmless, but unhealthy eating habits or poor oral hygiene can aid harmful bacteria to multiply, thrive, and cause damage. 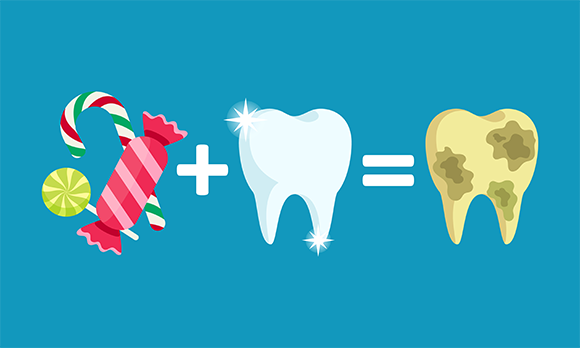 The equation according to which candy plus teeth equal tooth cavities is fundamentally correct, but inaccurate | Shutterstock, vectorlab2D

The bacteria feed on food remnants left on the teeth and gums. They especially like to take advantage of sugars and carbohydrate rich leftovers for the production of energy. While processing sugars and other carbohydrates, the bacteria secrete acids and mainly lactic acid as byproducts. Every time we consume sugars and do not brush our teeth, the bacteria produce more and more acid.  Following prolonged contact with the teeth, the acid damages tooth enamel and the dentin layer that coats the tooth, surrounding the entire tooth pulp. In this manner the coating becomes increasingly thinner and a small cavity is eventually formed in the tooth.

If left untreated, the cavity may grow and reach the deeper layers of the tooth. This process may result in pain and sensitivity to high or low temperatures. Advanced stages may include the formation of a pus pocket, swelling of the gums and a fever. When the damage becomes severe the risk of tooth loss also exists.

The process caused by the bacteria is termed dental caries. It is a chronic disease and evidence indicates that it has existed since the early days of humankind. The World Health Organization estimates that globally, 2.3 billion people with secondary dentitions and 560 million children with deciduous teeth suffer from dental caries.

The two main types of bacteria that cause dental caries are Streptococcus mutans and Streptococcus sobrinus. They adhere to teeth using a sugar polymer and create a bacterial layer called plaque on the surface of the teeth and in the spaces between the teeth and gums. It is important to remove this layer by brushing our teeth, rinsing the mouth and regularly visiting a dental hygienist. Once a cavity has already formed in our teeth, a dentist can clean the remaining enamel and plug the hole with a filling. 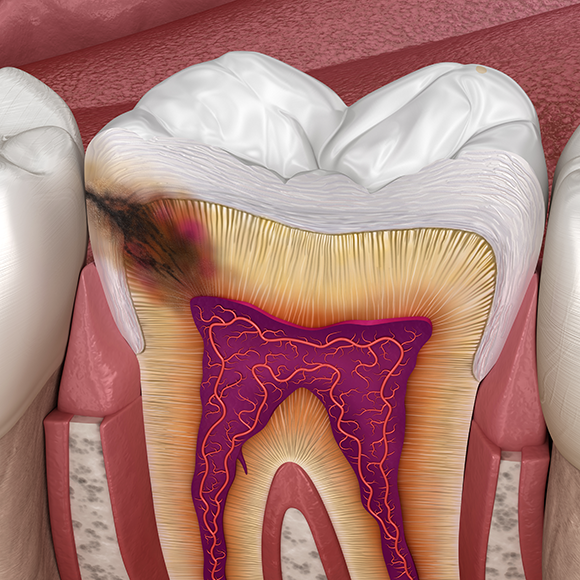 The acid produced by the bacteria damages the tooth enamel and the dentin layer that coats the tooth, until a cavity is formed. Illustration of a tooth cavity | Shutterstock, Alex Mit

Dental caries occurs mainly between the ages of 12 and 19. It is less common in younger children and in adults, but increases significantly in adults suffering from receding gums. It is also common in people of lower socioeconomic status, in part due to a carbohydrate rich diet that is more common in poorer populations.

In order to prevent dental caries it is recommended to avoid excessive consumption of processed or refined sugar, such as that found in candy, snacks, sweetened beverages etc. Even foods that are considered healthy, such as dehydrated fruit, honey and fruit juices may be harmful, if consumed excessively. Regular and thorough brushing of our teeth will prevent the effect of the bacteria and will make it difficult for them to feast on leftover sugars and damage our dental health.  It is also important to regularly see a dentist and a dental hygienist in order to remove the plaque layer and identify cavities at an early stage.

And in the future? A vaccine against the harmful bacteria may be developed. There have been many attempts in recent decades at developing a vaccine against dental caries some of which were even  successful at the stage of in animal trials, but none have yet reached the level of application in humans.