Why do we sometimes continue to feel as if we’re still on a boat, even after having already disembarked?

More than two thousand years ago, the renowned Greek physician Hippocrates wrote that “sailing on the sea proves that motion disorders the body”. Indeed, many people suffer from seasickness, which in fact is a form of motion sickness – nausea and dizziness experienced during sailing or even during a daily car ride. However, according to various estimates, between 43 and 73 percent of people suffer from a similar yet opposite phenomenon – land sickness.

Land sickness is a condition in which a person continues to feel the movement of waves or shifts under his or her feet, even though the voyage is over and the person is already back on land. The phenomenon is common mainly after a long period at sea, but can also occur after travel by other means of transportation, such as a train or a car. It has even been documented in astronauts returning from space. In fact, even surfing on a surfboard or running on a treadmill in the gym can evoke similar sensations.

What’s actually happening is that when we’re on a ship swaying up and down on the waves, our brain recognizes this pattern of motion and adapts the body’s motion to this situation. That is why we are able to walk straight on the deck of a sailing ship without slipping. However, when we return to solid ground, our brain sometimes needs some time to realize that this pattern of motion has stopped. During this time, we feel as though we’re still at sea, since the brain is still searching for the previous pattern of motion. Land sickness is as common in men as it is in women. Most people who suffer from it will also suffer from seasickness and will feel unwell when setting sail. 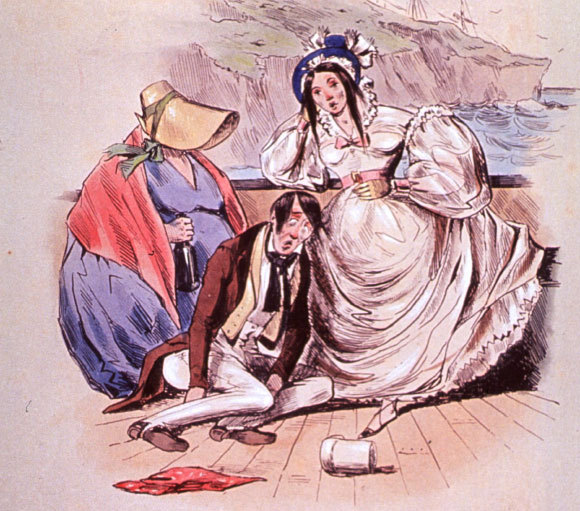 Land sickness that occurs after disembarkment is not as widely known as its counterpart, seasickness, although they share common symptoms | A 1841 caricature by GS Tregear, Wikipedia commons, public domain

For most people, this continuing sensation of motion will disappear within a few hours at most, or a few days, in extreme cases. However, a small number of individuals will continue to feel unwell long after the end of the voyage and in rare cases, symptoms may last for years.

When the symptoms last more than a month, it is no longer defined as land sickness, but as a vestibular disorder known as Mal de débarquement syndrome (MdDS), meaning “a condition affecting those who disembark”. Although we do not yet fully understand the causes for this disorder, some hypotheses as to the nature of the condition are currently under investigation.

Most researchers today believe that what underlies MdDS is not an anatomical problem or some physical damage inflicted to the inner ear, which contains the vestibular apparatus that is responsible for balance, but rather that this condition is caused by an inherent brain disorder. The most common explanation is that the patient’s brain gets “stuck” on the pattern of passive motion recognized by it while on board the ship, and is unable to readjust to the more stable situation characteristic to the stay on land. The reason for this is still unclear nor is it known why some people will be affected by this while others will not.

One of the most prominent symptoms of the disorder, which is sometimes used in order to distinguish it from other neurological problems, is that the hallmark symptoms subside as soon as the patient is again found in a wave-like passive motion pattern. Indeed, most patients do report feeling better while in motion, such as during a car ride.

This syndrome is more common in middle aged women. One of the hypotheses is that hormonal changes in the brain are the cause for the condition. It has also been suggested that the disorder is more common in people who tend to suffer from migraines, but there is no conclusive evidence to support this. There is no known cure for the condition, but several directions of treatment, which include brain stimulation, are under study.