Nearly all the instructions that define us biologically are found within 23 pairs of chromosomes. What is the structure of the chromosomes and how do they function?

Almost every cell in our body holds a complete copy of our entire DNA - a long and complex molecule that stores within it the hereditary information necessary to produce proteins, which are essential for the proper functioning of each and every cell in the body. The only exceptions are red blood cells, which have a different composition, as well as some of the mature skin cells that lose their DNA over time.

The DNA is composed of a long chain of short building blocks called bases, or nucleotides, to be precise. We, humans, have roughly 3 billion pairs of nucleotides in our DNA - a gigantic amount of data. Almost all of it is stored within the cell’s nucleus - a small organelle with a diameter of about six micrometers (a millionth of a meter). And yet, if we were to completely stretch the DNA in the nucleus of a single cell, we would find that it is almost two meters long. This impressive compression can be compared to the storage of a 40 kilometers long string within a single tennis ball.

The factors that allow for this impressive compression are proteins called histones. The DNA is wrapped around them, and in this state it is fully compressed inside the nucleus. Each section of such compressed genetic material is called a chromosome. 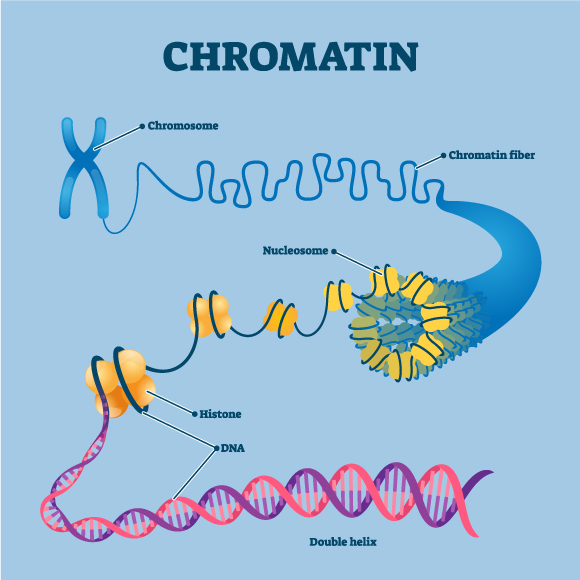 Illustration of the components of a chromosome - nucleosome (a structure that contains DNA and histones), a histone and the DNA double helix| Source: VectorMine, Shutterstock

The DNA within every one of us comes from both of our biological parents. During fertilization, the 23 chromosomes within the father’s sperm cell join the 23 chromosomes within the mother’s egg cell and together they make up the entire genetic material of the offspring. While 22 of the chromosomes are similar in shape in both the mother and the father and form equal pairs in the offspring, the last pair are the sex chromosomes, which have a different make up in males and in females: females usually have two X chromosomes, while males have a single X chromosome inherited from their mother, and a shorter Y chromosome inherited from their father. Thus, apart from the reproductive cells (termed gametes), each cell carries 46 chromosomes, consisting of 22 pairs of autosomal chromosomes and a single pair of sex chromosomes.

The shape of the chromosomes is dynamic and changes according to necessity. The chromosome has regions that contain genes - sequences of instructions for the production of specific proteins - some are required by the cell at certain times, while others are only rarely necessary. For example, some genes are active during embryonic development, but are no longer needed after birth.

Regions containing genes that are required by the cell will be relatively looser and less condensed than other regions of the chromosome. The location of the looser and tighter regions on the chromosomes are dictated by the type of cell and the conditions that each cell is required to face. For example, regions in certain chromosomes that will remain condensed in a nerve cell may be open in a pancreatic cell, since they contain genes that are necessary for the unique functions of the pancreatic cell - such as the production of the Insulin hormone. This ability to choose which genes should be expressed in each cell is essential for the body’s proper function.

The chromosomes reach their maximal condensed state when a cell divides into two identical cells in a process called mitosis. Before dividing, the cell duplicates all of its chromosomes, such that each of the two newly formed cells will contain a complete copy of the entire genetic material. During division the chromosomes are roughly ten thousand times shorter than their usual length. In this state it is also particularly simple to observe them under a microscope. 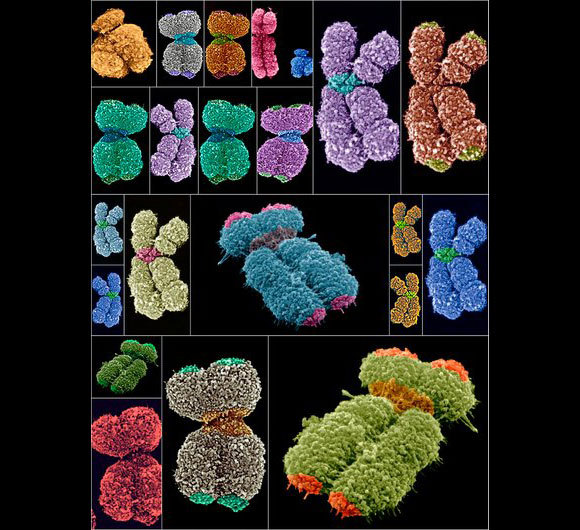 In preparation for cell division, the chromosomes reach maximal compression and then you can see them under a microscope. Human chromosomes (colored) in an electron microscope image | Source: Science Photo Library

The ends of chromosomes contain structures that are composed of repetitive DNA sequences. These sequences, which are termed telomeres, have no genetic significance on their own, but they fulfill a very important function, protecting the ends of chromosomes by preventing them from sticking to each other and preventing potential damage to the genes. The telomeres become shorter with each cell division, until no telomeres are left at which point the cell can no longer divide. It is commonly accepted that the shortening of telomeres has a major role in the process of cellular senescence.

Chromosomes are essential for the normal functioning of our body, and thus it is no wonder that defects in them can be harmful. Chromosomal defects can be manifested either in chromosomal structure or in the number of chromosomes, that is, an excess of shortage of chromosomes.

One well-known example of such a defect is Down syndrome, which occurs when an individual is born with three copies of chromosome 21, instead of a pair. This excess is manifested in a characteristic facial structure, developmental intellectual disability, risk of heart defects as well as other characteristics. In contrast, Turner syndrome is caused by the lack of a chromosome. Individuals suffering from this syndrome have only one X chromosome, or one intact X chromosome and another partial X chromosome, defining them all females. Symptoms include developmental problems, infertility, heart problems and more.

Sometimes, an entire segment of one chromosome can accidentally be transferred to another chromosome. Although apparently all the genetic material remains present in the cell in such a case, the misplacement of the chromosomal segment disrupts its function. An well-known example of such a disruption is the so-called Philadelphia Chromosome, which occurs when a segment of chromosome 9 is accidentally transferred to chromosome 22. This results is an increased risk of developing chronic myeloid leukemia, a specific type of blood cancer.

Thus, chromosomes comprise the structures within which most of our genetic material is organized and stored in the cell nucleus. Their proper structure is essential for the biological function of cells, tissues and the entire living organism.

The chromosomes accompany us at every stage of our lives, beginning with pregnancy, throughout our adult life and into old age. The more we understand them in depth, the more light we will be able to shed on the variety of ways in which they affect our lives, and potentially treat conditions related to them, such as cancer and aging.