How Do Gaseous
Planets Form?

The question of how the world formed has intrigued the human race since the dawn of history. Throughout generations we came to understand that the Earth is just one of many worlds, and yet, until just three decades ago the only planets we knew of were those found right here in the neighborhood - in our Solar System. It is therefore not surprising that the efforts to explain how planets form focused only on these known planets.

The first planets outside our Solar System were discovered only towards the end of the 20th century, and they immediately challenged everything we thought we knew about the formation and evolution of planetary systems. As these discoveries accumulate, our understanding of the ways planets can form becomes clearer.

The current leading theory on the formation of star systems is the Nebular Hypothesis. It was initially developed as early as the 18th century, when the German philosopher, Immanuel Kant, and the French astronomer and mathematician, Pierre-Simon Laplace proposed it, independently of each other. Over the years it was abandoned and almost forgotten, until it resurfaced, in its updated version, in the late 1960s.

According to this theory, the interstellar medium contains enormous gas clouds, consisting mainly of molecular hydrogen and known as “molecular clouds”. These clouds serve as a kind of “birthing centers” for stars, which form from the matter in the cloud, which also includes dust. The Nebular hypothesis states that when a new star - that is, a new sun - forms, not all of the matter in the cloud is absorbed by the star. A bit of the gas and dust that is not absorbed by the star accumulates around it in the form of a flat disk, known as a “protoplanetary disk”. The planets will later form from this protoplanetary disk. 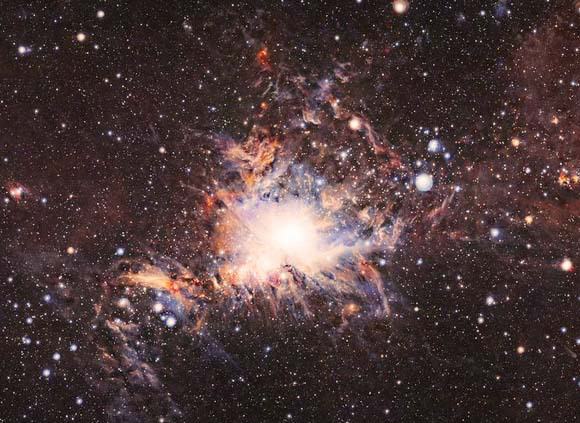 Stars form through a process of inward collapse following the disintegration of the cloud. When the mass of a molecular cloud is large enough, or following an external disturbance such as a collision with another cloud, it becomes gravitationally unstable and breaks up into many smaller fragments. Each of these cloud fragments collapses due to its own gravitational force. These, too, break up into even smaller fragments that continue to collapse until a star forms from each and every one of them. The unaccreted remnants of the cloud form a rotating circumstellar disk around each star, so the protoplanetary disk is a byproduct of the process of star formation. 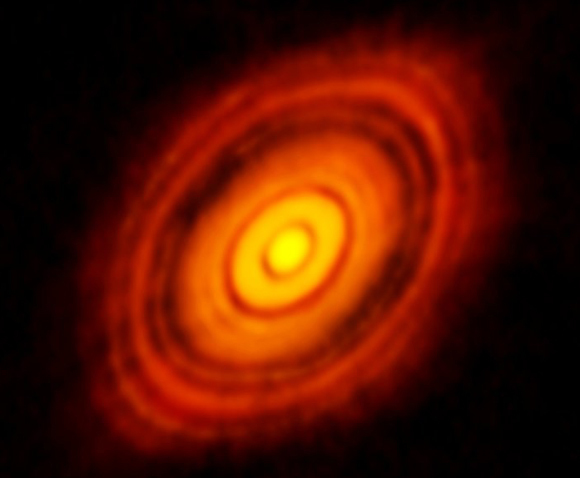 The first clear image of a protoplanetary disk, taken by the ALMA radio telescope array in 2014 around the star, HL Tauri. The dark rings are probably the orbital paths of planets in the process of being formed | Photo: ALMA (ESO/NAOJ/NRAO)

From Collapse to Growth

According to the Nebular hypothesis, planets are formed by a process opposite to that which formed their sun: they do not collapse inward but rather grow from the inside out. This is a slow, ongoing process in which cosmic dust grains in the protoplanetary disk collide with each other and gradually consolidate into small pebbles. These pebbles, in turn, continue to come together to form large kilometer-sized lumps of rock known as planetesimals, or in other words, ultimately small fractions of a planet. A planetesimal is large enough to attract solids and gasses found in the protoplanetary disk by the force of its gravity, at a rapid pace, and to turn into a protoplanet. The larger the protoplanet, the more efficiently it cleans the disk matter around its orbit, and even accretes smaller planets.

At distances relatively close to the star, the temperature of the disk is higher than the freezing temperature of volatile compounds such as water, methane, and ammonia. Therefore, these volatile substances exist in the gaseous state and cannot condense on the dust particles and on the pebbles and enlarge thus the planet’s core. That is also the explanation, according to this hypothesis, as to why the planets found closest to the Sun in our Solar System  - Mercury, Venus, Earth and Mars - are rocky planets.

Since the disk temperature decreases as the distance from the star decreases, at distances greater than the “frost line” - the particular distance at which the disk temperature matches the freezing temperature of these volatile substances - there is much more solid matter that can participate in the process of planet formation. Therefore, at these distances much larger protoplanets, with a core composed of rock and ice, can form. Giant protoplanets are able to accrete an incredible amount of gas from the disk and become gas giants, such as Jupiter and Saturn. At even greater distances, the density of the disk matter is lower. Therefore, smaller ice giants, such as Uranus and Neptune, will form there. This model, which explains the formation of gas giants via accretion of large amounts of gas onto the initial core of the protoplanet, is called the Core Accretion Model. 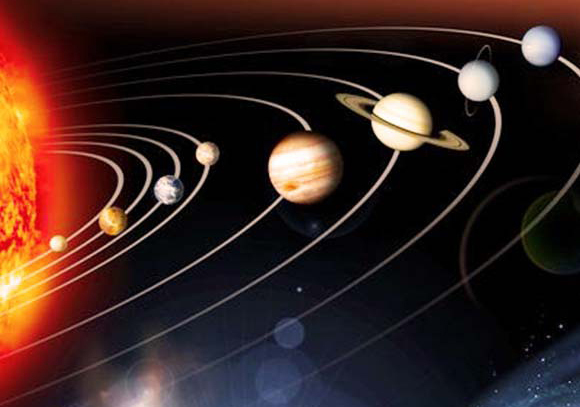 The rocky planets have orbital paths closer to the sun, the gas giants are beyond the frost line, and the ice giants, Uranus and Neptune, are even further away. A model of the Solar System | NASA, JPL, Science Photo Library

Other Suns, Other Rules?

These dynamics are highly compatible with the structure of our Solar System, leading to the conclusion that gas giants can only be found beyond the frost line. But surprisingly, the first planet to be discovered around a sun-like star, 51Pegasi b, is a gas giant that orbits very close to its sun—at a distance that is almost 19 times smaller than that separating Earth’s orbit from the Sun. For this discovery, researchers Michel Mayor and Didier Queloz, were awarded the 2019 Nobel Prize in Physics. Since then, many gas giants that have short orbital periods and are thus found in close proximity to their suns, have been discovered and informally named “hot Jupiters'', after planet Jupiter. According to the leading explanation, these gas giants originally formed far from their star, beyond the frost line, and subsequently migrated inwards to a closer orbit.

A new discovery, which was published a few months ago in Nature Astronomy challenges the Core Accretion Model as the accepted explanation for the formation of gaseous planets. It turns out that the Nebular hypothesis could support an alternative explanation for the formation of gas giants, known as the Disk Instability Model. According to this model, gas giants can form directly from the collapse of disintegrated disk fragments, with no need for initial formation of a protoplanetary core, similar to the way planets are formed from molecular cloud fragments.

In a study led by astronomer Thayne Currie, using the Subaru Telescope at the National Astronomical Observatory of Japan in Hawai’i, the researchers discovered a gaseous protoplanet near the star AB Aurigae, found in the Auriga constellation. This is a very young star in astronomical terms - only 1–5 million years old, and it is indeed still surrounded by a protoplanetary disk. In photos obtained from the Subaru Telescope in Hawaii and the Hubble Space Telescope, the researchers identified the protoplanet as a bright orange spot on the disk, which appears to change its position along its orbital path around the star in images taken in different years. 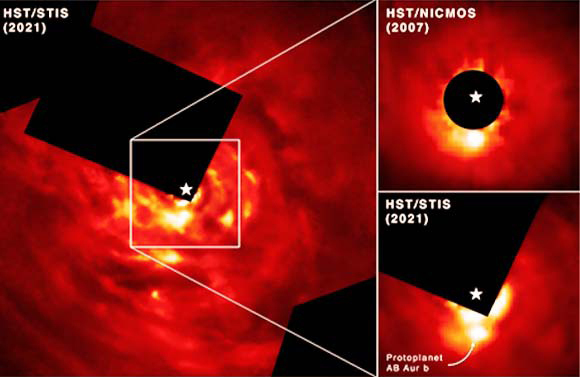 Nine times larger than Jupiter. The protoplanet AB Aurigae b in images taken by the Hubble Space Telescope, in 2007 and 2021, appears as a bright spot below the star | NASA, ESA, Thayne Currie (Subaru Telescope, Eureka Scientific, Inc.), Alyssa Pagan, STScI

Since the planetary system of AB Aurigae is still very young, the possibility that the gas giant coagulated closer to the star and then migrated outward can be ruled out. Moreover, the researchers identified spiral arms connecting the protoplanet to the nearby regions of the disk. In their opinion, this finding is also consistent with the predictions of the Disk Instability Model.

This is the first direct evidence of the formation of gaseous planets from the collapse of unstable regions of the protoplanetary disk. It appears therefore, that gas giants can form in different and diverse ways. The more planetary systems we discover, the deeper our understanding of the way by which our Solar System and other planetary systems were formed.